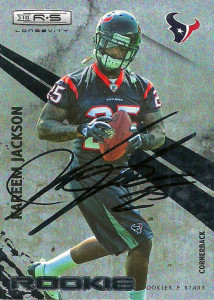 I have been looking to get Kareem Jackson for a very long time, but I knew he wasn’t a good through the mail signer. It didn’t really seem that he signed very often at that until this year, so I was very excited to see K-Jax at this gem of an event with 3 other players.

Of all the Texans I have been hard on over the years, Kareem has probably shouldered most of the hostility. A first round choice by the Houston Texans in 2010, he was immediately tabbed into the starting lineup and became a frequent victim of Peyton Manning and other quarterbacks around the league- replacing much maligned Duanta Robinson.  It took Wade Phillips entering as defensive coordinator in 2011 to jump start a change in Jackson’s play style. One of the things that Phillips wanted to change was Kareem’s backpedal style and fundamentals. This really helped out Jackson immensely.  The Texans also gave him support in the names of Johnathan Joseph and Danieal Manning and put an emphasis on putting pressure on the quarterback.  Jackson started at least 13 games in each season since being drafted until injury sidelined him extensively in 2015. Still he returned by the season finale against the Jags, a defensive masterpiece, in which K-Jax intercepted Blake Bortles for a 27 yard TD. He started 12 games in 2016, contributing 1 interception- another critical pick of Blake Bortles that he returned 42 yard for his second career TD.

At the conclusion of the 2016 season, Kareem had 13 career interceptions, 2 TDs and 60 pass break ups. With the Texans doing a little tinkering in the secondary for 2017, rumor is that Jackson may see more time at safety this year.