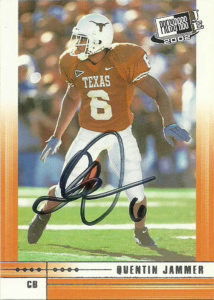 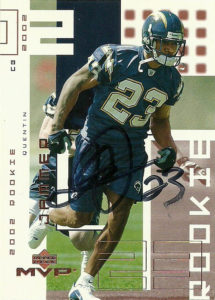 Quentin Jammer is another member DBU at the University of Texas. A big physical corner, Jammer’s draft stock shot up dramatically during his senior season, prior to the 2002 NFL draft.  Quentin was a shut down corner, and finished with 56 career pass breakups (a school record) and 7 interceptions. A complete package, Quentin had great closing speed and really knew how to ‘jam’ receivers off the line of scrimmage. He also was a fine tackler- for a defensive back.

Drafted by the San Diego with the 6th overall pick, a holdout stymied Jammer’s assimilation of the Chargers’ defensive system. He’d get onto the field in 2003 as a starter and not look back, holding down the starting LCB spot for the next 10 seasons, starting a total of 161 games for SD. Over his time there he had 10 straight seasons of 10+ pass breakups. A physical defender, Jammer had a hard time transitioning to the NFL system which favored receivers and prevented Jammer’s style of play. He recorded his first career TD in 2012 against Denver, returning a pass 80 yards for a score. Later in the year, he recorded his first fumble recovery for a TD against the Pittsburgh Steelers. The next season he’d join the Broncos where he dabbled at safety. He’d retire after the season.

While interceptions and turnovers are sexy stats, I’ve always felt that pass breakups are criminally underrated. Jammer’s numbers were tracked extensively over his career and his is credited with an astonishing 141 PBUs. Jammer as of 2016 lives in California, and is still a big University of Texas fan.