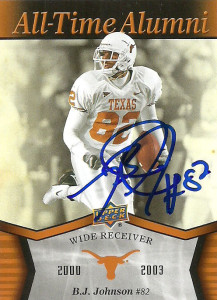 Considered one of the University of Texas’ best receivers in school history, BJ Johnson played alongside the much hyped Roy Williams and Sloan Thomas, and formed the greatest trio that the Longhorns have seen at receiver from 2000-2003.  He became the first Freshman to start at wide receiver since 1992 for the Longhorns, and finished 2nd in receptions and receiving yards among all Freshman wide receivers nationally. He broke the school single game Freshman receiving record with 9 catches for 168 yards against Baylor that year.  Later on,  BJ set the school record for the longest TD reception, a 92 yard bomb against the Houston Cougars and averaged a walloping 44 yards per TD reception. Johnson finished in the Top 10 All-Time for the Longhorns in receptions (152,
ranked 6th), touchdowns (16, ranked 5th), and yards receiving (2,359, ranked 5th) as quarterback Major Applewhite‘s favorite target. He considers his first TD grab as a Freshman in a losing effort to Stanford as his favorite play. 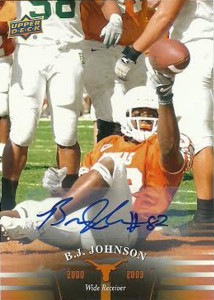 Johnson played unknowingly on a broken tibia in 2003, causing him to tumble off draft boards, after he strained an oblique during the Senior Bowl. He’d be signed by the Denver Broncos to a UDFA after the draft. He rehabbed and made the team, but injuries kept mounting for BJ. He’d break his ankle and then the following year tore his hamstring. BJ signed with Tampa in 2005, but messed up his shoulder, deciding to hang up his cleats.

In 2015, Johnson launched a line of Vodka called MVP with Roy Williams, that he’s been marketing around Texas. Appearing alongside other former Longhorn greats as well at bottle signings, I decided to give it a shot with Shawn and Nate when I saw that it was a nice cast of Johnson, Williams, and VY. Johnson was more than happy to sign a few cards for a Longhorn fan, and discussed with us the almost medieval sounding hoops that his company had to jump through with the different alcohol sellers- since it is still dominated by mom and pop stores.

I have 3 or 4 more cards of BJ that I hope to get signed in at a future MVP event near Austin, but it appears that their advertised meet and greet events are on hiatus around town for the time being.