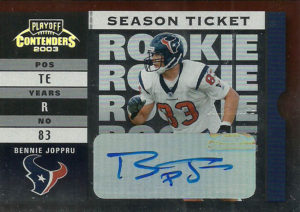 Bennie Joppru comes from strong football bloodlines where his father and brothers all played football at the college and/or pro levels.  Bennie himself, played collegiality at Michigan, where over his four years playing for the Wolverines, contributed 85 receptions for 800 yards and 8 touchdowns.

The Houston Texans finished their inaugural season with a 4-12 record.  Eager to improve on the team’s record, Dom Capers jumped at the chance to coach in the Senior Bowl the following year.  Bennie made the longest play of the game- a 23 yard juggling catch from Kyle Boller.  Capers and Casserly must have liked what they saw out of Joppru, and with TE Billy Miller an RFA, the team could also have an insurance plan in case things didn’t work out.

Houston traded around with New England, before selecting Joppru in the second round of the 2003 draft- a full 20 picks before Dallas selected TE Jason Witten.  Bennie then destroyed his groin with a pelvic hernia during training camp. He’d be on IR the next two seasons.  In 2005, Joppru blew out his ACL during training camp and again was placed on season ending IR.  After the season, Capers was fired.

With new head coach Gary Kubiak in town, the team took another long look at Joppru. They liked what they saw and he got another shot, but the team was a much different beast now, especially at the tight end position led by rookie Owen Daniels, wily veteran Mark Bruener, and Jeb Putzier. The Texans attempted to convert Bennie to fullback, but cut him in October of 2006.

He’d be signed by the Chicago Bears practice squad, and then called up almost immediately to back up Jerramy Stevens and play special teams in Seattle. In 2007 he returned to the Seahawks, but thigh and hip injuries pretty much ended his season and career in the NFL.

Among the pantheon of picks made by the original regime in Houston- is Bennie’s considered a run of bad luck or a bust? Admittedly, I place him at the top of the list in a long line of bad reach busts by the Texans early in their checkered history.