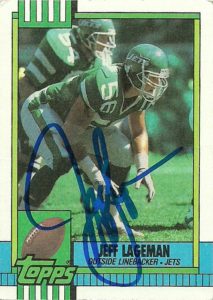 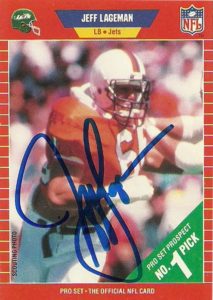 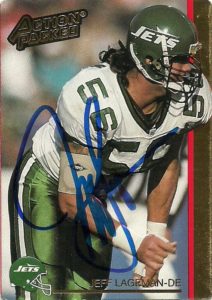 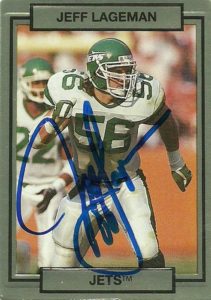 Jeff Lageman was a force for Virginia playing both defensive end and linebacker for the Cavaliers.  He was selected by the New York Jets during the loaded 1989 draft in the first round as a defensive end, but at 6’6″, 266 Jeff was considered undersized at the pro level for the position.  Considered one of the early tweeners, Lageman played both defensive end and linebacker for New York.  He played for the Jets through the 1995 season posting a respectable 330 tackles and 34.5 sacks.

He’d sign as a free agent with the Jacksonville Jaguars for their inaugural year. The Jags played him exclusively at defensive end, where Lageman played the final 4 years of his career, retiring after the 1998 season due to injury.

A popular figure around Jacksonville, Jeff was able to leverage his football persona and combine that for his love for the outdoors on the radio. He’s done color commentary for football games and weekly features for the Jaguars.

Jeff signed these 4 cards for me in no time flat. He’s got some spectacular early cards. Even his Topps 1990 card was one of those rare action shots.