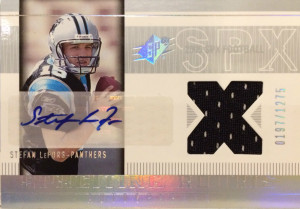 He participated in the NFL combine and clocked a QB best 4.56 40 yard dash. NFL teams were abuzz, but felt that due to LeFors lack of size and bulk, he was more adept to being a halfback or safety at the pro level.  The Carolina Panthers drafted Stefan with the 121st pick (4th round) of the NFL draft. With Jake Delhomme firmly entrenched as the starter and Chris Weinke as his backup, LeFors was placed on the practice squad.  He did not see any action in 2005 and did not make the final cuts of the 2006 team.

Lefors signed with the CFL later that year, joining the Edmonton Eskimos, and was named the team’s backup quarterback.  In 2007 he was named the CFL’s offensive player of the week when he threw for 412 yards in his team’s 36-29 overtime loss to the Saskatchewan Roughriders. He served as the Esk’s backup QB through the duration of the 2008 season.  He was traded to the Winnipeg Blue Bombers in 2009 and threw for 459 yards and 2 TDs.

As of 2016, he is a coach in the Louisville area, and previously had served as a color analyst for his Alma Mater.