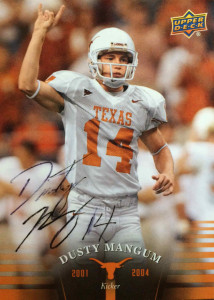 With a name like Dusty Mangum, it’s easy to see why by in name alone he’s considered a Longhorn Legend.  With ice in his veins, fans ‘Magnum’ became endeared to Texas fans for his penchant to make critical kicks in the waning moments of games.  No contest was more critical to the Longhorns than the 91st Rose Bowl- a pivotal matchup against the Michigan Wolverines in 2005. The Burnt Orange had returned to prominence, but there were still doubters out there of the Longhorns abilities.  Texas battled Michigan to the final bell where as time expired Dusty kicked a 37 yard winning field goal to give the Longhorns the win 38 to 37. The kick was notable due to the fact that it was Mangum’s final kick and catapulted him into becoming a mini-state celebrity darling.  Dusty’s story is all the more amazing in that he was originally a walk on who worked his way up to become the 3rd leading scorer in school history with 358 points.

Texas has a storied history of kickers.  Phil Dawson and Justin Tucker are current names, but then there was kickers in their own right like Bobby Liljedahl, Happy Feller, and Russell Erxleben. Then there was Dusty. Who knows why Dusty never pursued a pro career. He certainly had the resume and leg strength to go for it. Maybe he realized that this was his best chance to go out on top?

Since his glory days at Texas, the Longhorn Legend has lived in the North Texas area where I got his autograph on this card in a very short period of time.