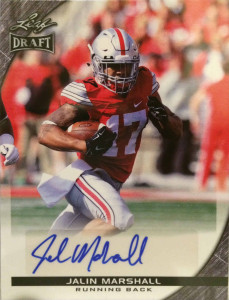 A cruel unwitting joke did the people at Leaf play on me.  No sooner than I thought that I might be pulling Ohio State runningback Ezekiel Elliot, I realize it’s just his backup Jalin Marshall.

Marshall did a lot though during his short time playing for the Buckeyes. He fit a variety of roles outside of backing up Elliot. He was a gifted return man, receiver, an oft used 3rd down specialist, and an H-Back. Jalin’s 38 receptions as a Freshman were only second on school history behind NFL Hall of Famer Cris Carter (41).  Jalin finished his career at Ohio St. with 74 receptions for 979 yards (13.2 average) and 11 touchdowns.  He also averaged 12.7 yards per return off 52 career punt returns, including a 54-yarder against Indiana.  Marshall did this all with two years of eligibility still remaining, declaring for the draft after his Sophomore season.

Scouts were unsure as to where to put Marshall.  Some boards viewed him as a wide receiver while others saw him as being a runningback. His versatility is a double edged sword, as Jalin had little experience playing runningback, and while he presents decent athleticism, he did not have the best showing at his pro day, displaying average speed. Marshall was considered a late round find by teams, bordering on priority free agent for the 2016 draft. After the draft he signed with the New York Jets.

As injuries plagued the Jets this last season, Jalin was able to get into the lineup and caught his first TD against Miami in week 9. The team utilized him all season, as advertised- as a jack of all trades as he saw action, kick returning, punt returning, and receiving.