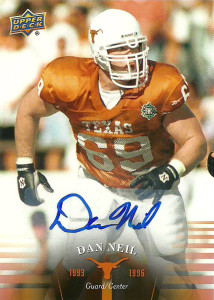 A well decorated lineman at the time of his graduation from the University of Texas in 1996, Dan Neil was an All-American in his final season for the Longhorns. Over his time with the burnt orange, Dan started 49 straight contests at either guard or center.  He’d be selected in the 3rd round of the 1997 NFL Draft by the Broncos, and be a surprising contributor to Denver’s Super Bowl runs, blocking up front for John Elway. A durable and reliable presence he’d start 104 games playing primarily at right guard. As of 2017, he lives in the Austin area and does radio work. He was inducted as a Longhorn Legend into the Football Hall of Honor in 2008.