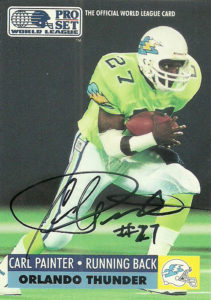 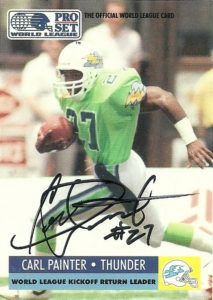 The Orlando Thunder had a stacked offense. At runningback they featured a variety of styles of runners including former Detroit Lion track man Carl Painter. Carl earned his keep primarily on kick off return duties, averaging a league leading 24.9 yards on 24 returns. He set a league single game record when he had 6 kickoff returns for 178 yards against the Knights. Carl sprained his shoulder in a week 8 contest against Sacramento, and finished the season with 15 carries for 47 yards to go along with 13 receptions for 157 yards.

Painter played two seasons for the Detroit Lions, after being selected by them during the 6th round of the 1988 draft. Over two seasons, he had 106 yards on 32 carries and 4 catches for 42 yards. He also chipped in 18 kick returns for 361 yards and a 20.1 yard average.

A sensational runningback at Hampton, Carl rushed for 3,223 yards from 1983 to 1987, and led the team in scoring in both 1985 and 1987, netting him all-conference honors with the Pirates. In 2009, he was inducted into Hampton University’s inaugural Athletic Hall of Fame.

Being that Carl had 2 cards in the vaunted ProSet WLAF 1991 set, I had tried multiple times to get Carl but had lucked out. I have been collaborating with Mark of Mark’s Signing Bonus for some time on tracking down players from the league. Luckily he got a nice hit on Carl, so I sent out to him immediately the next day. Carl wrote me a really nice note, thanking me for remembering him along with the two autographs. As of 2017 he works in management for a city Parks and Recreation department in Virginia.