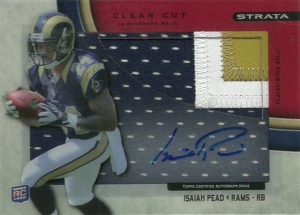 A playmaker for the Bearcats of Cincinnati, Isaiah Pead had over 1000 yards from scrimmage in three out of four years.  A shifty runner with soft hands,  Pead had career highs every year he played at the college. In 2010 he rushed for 1029 yards on 157 carries and 6 TDs. He’d eclipse those numbers in 2011 with 1259 yards, and 319 yards receiving (39 receptions).  Isaiah did everything the scouts wanted and more at the combine. He was the combine leader in the 3 cone drill at 6.95 seconds, and his 40 was a respectable 4.47 seconds.  At 5’10”, 197, Pead was all muscle and flash, but criticized for his lack of blocking.  Isaiah was selected in the second round of the 2012 NFL draft by the St. Louis Rams.

The Rams liked Pead a lot, and hoped he’d help spell ageless wonder Steven Jackson on 3rd down.  Isaiah spent his rookie year on special teams, while rushing for 54 yards on 10 carries.  He’d get swallowed up in the runningback competition after the departure of Jackson the following year behind Zac Stacy and Benny Cunningham. Pead got to show his skill as a gunner on special teams and the Rams floated him for a trade during the 2014 NFL draft. During the 2014 preseason, he blew out his ACL and was lost for the season.

After the selection of Todd Gurley in the 2015 NFL Draft the writing was on the wall for Isaiah. He’d be cut in late September. He later worked out for the Jets and then signed with the Steelers as an injury replacement for Le’Veon Bell. Within a month Pead was cut. In 2016 Isaiah found a home with the Miami Dolphins. He’d impress during the preseason behind Arian Foster and Jay Ajayi, but a hamstring injury during the preseason sidelined him. He was cut during the first month of the season.

Tragically in November of 2016, Isaiah was almost killed when his Cadillac CTS careened off the highway and down a 40 foot embankment. His left leg was severed and his right one was badly mangled. He survived and after some 8 surgeries, has made an amazing transformation in his life. Isaiah has a vehicle moving service called Stampede Trucking and also wants to be an inspiration to those who have suffered a physical calamity in their lives.

Great card of Isaiah here punctuated by his solid autograph. The patch on this card is really nice. Even though I do not like the fact that resellers retail two and three color patches at a premium, I can understand why especially when you look at this solid card.