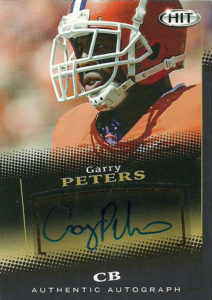 Garry Peters went unselected in the 2015 draft, and you have to wonder- why? Peters was considered one of the nation’s elite cornerbacks after a solid 2014 campaign. Over a two year period he only allowed 233 receiving yards and didn’t allow a single TD pass thrown his direction in 58 targets. Pretty impressive numbers for the Clemson alum. Well apparently the knock on Peters was his physical style at the line of scrimmage wasn’t going to fly at the NFL level. His 40 time at the combine was considered pedestrian at 4.61, but he also stood out by going up daily against the likes of first round talent Sammy Watkins and D’Andre Hopkins in practice at Clemson.

The Panthers love big bodied corners and signed Peters to a free agent contract. He turned heads in minicamp but was cut on the eve of the first day of practice due to a hamstring injury. Peters agent kept him very busy making a tour of the AFC East. He received tryouts with the Bills, Patriots, and Dolphins but didn’t get a bite.
He gave the CFL a shot in 2016 and landed on the roster of the Edmonton Eskimos.  Garry had 24 tackles and 5 special teams stops in 11 games in his rookie campaign.  As of 2017 he continues to play for the Eskimos.