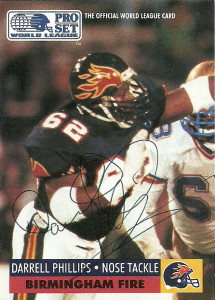 Darrell Phillips was a stud in the middle of LSU’s defense during his time playing for the Tigers during the mid-late 80s. In his Junior year, he had 100 tackles, 4 sacks, and 5 TFL. A versatile player, he also blocked 3 kicks on special teams and was named the team’s most valuable defensive player. In 1988 he was a First-Team All-SEC selection with 76 tackles and 3 sacks.

He wasn’t drafted but saw time in the camps of both the New Orleans Saints (1989) and British Columbia Lions (1990) before being selected in the first round of the WLAF positional draft by the Birmingham Fire in 1991. Phillips helped pace the stingy Birmingham Fire defense with 38 tackles and 2 sacks, which earned him second team All-World League Honors.  He returned to the team for the 1992 season and again notched another 2 sacks.

Darrell was one of the few members of the Birmingham Fire that escaped me when I was trying to get autographs back in 1992 during that humid night game against the Riders.  After some sleuthing, I was able to track him down on Facebook, where he was displaying his LSU pride.  He kindly responded to my message and agreed to sign this card for a few extras that he could keep.  Phillips has split his time between the US and Canada for the past few years.

His favorite memory from the league was: “Coach Chan Gailey and the defense. He was a great coach who treated you like a man and the players… all of them were a great inspiration one way or the other…”