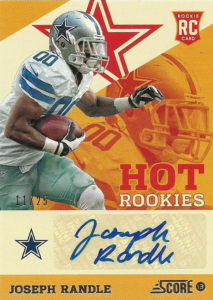 Joseph Randle is a painful tale.  After an impressive college career at Oklahoma State from 2010-2012, in which he rushed for 3085 yards and 40 TDs, Randle decided to turn pro.  He was selected in the 5th round by the Dallas Cowboys in the 2013 NFL Draft.

He earned the backup spot behind DeMarco Murray his rookie year, starting 2 games (when Murray was injured), and scored his first professional TD in a 31-16 romp of the Washington Redskins in week 6.  Even though he started no games in 2014 Joseph saw his workload increase, and he saw a career high 345 rushing yards, including a 65 yard blistering scamper.  The timing couldn’t have been better, as Murray would bolt via free agency.

Randle would be named defacto starter in his absence for the 2015 season.  Fans clamored that Randle was a sleeper in upcoming fantasy football drafts, but cracks had already started appearing in Joseph’s football foundation, as he started running into legal trouble in October of 2014.

He’d be arrested for simple theft, which caused him to be the butt of late night jokes for a few weeks, because it was over cologne and underwear. 4 months later in February of 2015, he’d be arrested again, this time for marijuana possession- but the charges were later dropped.  It was a pivotal fall from grace from the heir apparent to the Cowboys rushing mantle. During the bye week of the season the Cowboys installed Darren McFadden as starter, and tried to get Randle psychiatric help.  He’d be cut shortly thereafter, and then received a 4 game suspension from the NFL.  Joseph was lost.

Things didn’t end there as far as Joseph’s legal issues are concerned.
He’d be arrested in November of 2015 for assault of security guards at a local casino.  He’d keep in NFL shape, but no teams were calling. Joseph continued to seek counselling in the meantime.  Then in February of 2016 he’d be arrested for an outstanding warrant for speeding.  At the time of his arrest, he’d sadly state, “This is the end of my career.”

Joseph later claimed that teams were interested in working him out, but Joe- whether it was from drugs, alcohol, or maybe even a lingering concussion, continued to spiral out of control.  He’d be again arrested later that month for an assortment of charges, including battery and possession of drugs- most of which would later be dropped.  His bond would be pulled after he failed to appear in court.  In February of 2017 he’d be arrested again on disorderly conduct and battery while in a Kansas jail.  He’s been held in solitary for a great deal of his confinement, and as of early 2017 still awaits trial on many charges stemming from his recent behavior.

Joe is a terribly tragic case. It’s not really certain if it is concussion related, mental illness related, or drug and alcohol related- but one thing is for sure: A young man’s life has fallen through the cracks of a system that should have helped him.