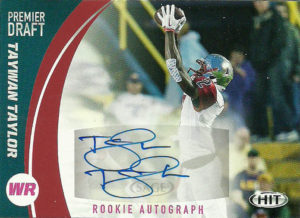 Taywan Taylor played for the Hilltoppers of EKU. Because of his ‘small school’ status- opponents and scouts have severely underrated Taywan’s talent.  He’s just done about everything to prove them wrong catching 9 passes for 121 yards against the NFL grade Alabama secondary.  With supersized paws and the speed to match, he led the FCS in 2016 in yards on deep passes with 948.   NFL scouts have pegged Taylor in as a slot receiver.

I myself- was hoping the Texans would snag him. I thought his combination of speed and size in the slot would be perfect for the team, reminding me of TY Hilton, (another prospect I had hoped the Texans would select, but ended up on the Colts instead). True to sad form, Taywan was not selected by the Texans, but rather by division rival Tennessee.   The Titans took Taylor with the 8th pick of the 3rd round of the 2017 draft.

A really solid card here by Sage with a good action shot combined with clear photography and nice framing.  It also helps that Taywan has a really solid autograph- something that I can appreciate. I tweeted to Taylor about his card and that he was a sleeper in the upcoming draft which caught his attention enough that he retweeted it.