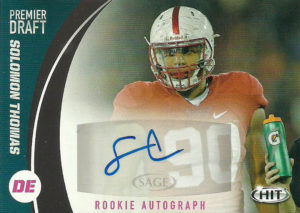 Solomon Thomas played for the Stanford Cardinal and is considered a blue chip prospect in the 2017 NFL Draft. A two year starter at strongside defensive end, he recorded 98 total tackles, 24.5 tackles for losses, 12 sacks, and 4 fumble recoveries. Well conditioned, teams raved about his sideline to sideline impact, and likened him to Justin Smith. The feeling is that the sky is the limit for Solomon as he grows into his full potential in the pros. It was expected that Thomas would not make it out of the top 10 in the 2017 NFL Draft.

The draft opened as expected, but the Bears traded up with the 49ers one slot to grab Mitch Trubisky in a stunner move, and handing SF a few picks in the process.  It is unknown if the ‘9ers coveted Trubisky at all, but they quickly then turned around with the 3rd overall pick and selected Thomas where it is expected that Solomon will contribute early in his career with the team.