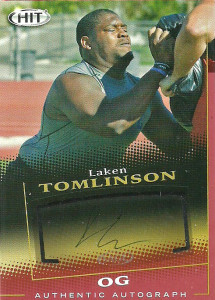 Wow. Among the pantheon of bad autographs, Laken Tomlinson’s is definitely near the top.  A big bodied people mover, Laken was selected at the back end of round 1 in the 2015 NFL draft by the Detroit Lions after shooting up the boards in the weeks leading up to it.  While a 4 year starter at Duke,  he displayed nice straight ahead speed and didn’t allow a sack in his final two years. He was on rare form in the Senior Bowl, neutralizing defensive power players with ease.  Laken was selected in 2014 as a first-team A.P. All-American and first-team All-ACC.  He also earned Second-team All-ACC selection in 2013, and an Academic All-ACC selection in 2012 and 2011.

After looking overwhelmed initially, Laken began to adjust to the rigors of the NFL game. He ended up starting 14 of 16 games for the Lions in 2015 at guard.  Unfortunately he regressed in 2016 and lost his starting job. With the Lions rebuilding their offensive line with the signing of TJ Lang- Laken’s future with Detroit looks cloudy at best.