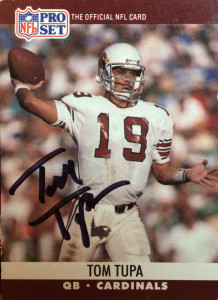 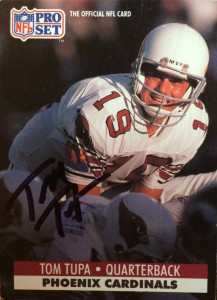 Tom Tupa was selected in the 3rd round of the 1988 draft by the then Phoenix Cardinals out of Ohio State. Unbeknownst to even the Cardinals, the franchise was at the beginning of a long search to find an answer at quarterback to replace long time quarterback Neil Lomax– whose career quickly declined after 1988, due to injury and an arthritic hip. After Lomax’s sudden departure left Phoenix in a lurch in 1989, the Cardinals staffed a platoon at quarterback with Gary Hogeboom, Timm Rosenbach, and Tom sharing the workload. Tom threw for 973 yards and 3 TDs- to 9 interceptions, while suiting up for 14 contests.  He also got to showcase his impressive skills as a punter filling in for injured starter Rich Camarillo in a pinch. After not seeing any playtime in 1990, Tom spent one final season in Phoenix. He’d win 4 games in 11 starts and throw for a career high 2053 yards and 6 TDs.

1991 led to a short stay in Indianapolis for Tom. Afterwards he bolted for Cleveland. He spent the next three seasons with the Browns. It’d be in 1994 that Tom finally made a rare positional move from quarterback to punter. One could also argue at this point, that Tom had become the best emergency quarterback in the NFL. In 1996, Tupa signed with the New England Patriots and punted for them through the 1998 season. 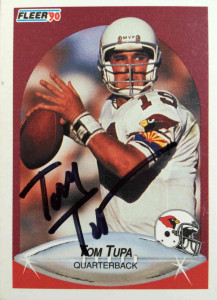 In 1999, Tom had his finest season as a pro playing for the New York Jets. He’d earn Pro Bowl and All Pro Honors after the season punting 81 times for 3659 yards. Tupa played for the Jets through the 2001 season, before playing for the Buccaneers for 2002 and 2003.  His final season came in 2004 with the Redskins – a year in which Tom set career highs for punts (103) and yards (4544), earning him an invitation as a Pro Bowl alternate.

In a small bit of trivia, Tom is known as ‘Two Point Tupa’, for scoring the league’s first 2 point conversion, and repeating it two more times later in the season.

Tom as of 2016 was a coach at a local high school in Ohio. He signed these 3 cards for me in a bit over a week. ProSet had a major soft spot for Tom and I wasn’t really sure why, covering him in their 1990 and 1991 entries. Notably Score and Topps didn’t make early first or second year cards of Tom.  Fleer 1990 was the company’s first foray back into the football card market in many years. The set was novel looking enough, with nice action shots, but the design of the card itself did not age well with the abstract metal football logo, and the random team helmet just sort of haphazardly thrown on there.