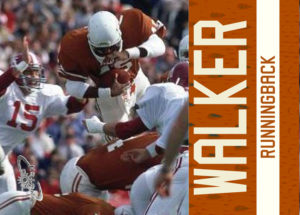 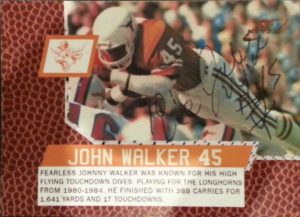 High flying John Walker was known for his fearless high-flying, short yardage heroics during his time at the University of Texas. The runningback finished his career with  388 carries for 1,641 yards and 17 TDs.

He was drafted by the then St. Louis Cardinals in the 9th round of the 1984 draft but did not make the squad.

John suffers from stage 2 colon cancer. I had heard about his story on a news channel and decided to make a card of him. Knowing that he was a member of the NFLPA Austin/San Antonio, I sent the custom out to him with a donation. I know that deep down, having your own football card, means a lot to somebody who never had one, especially the ‘old timers’. They understand the value of it, and how accomplished it makes them feel. John signed the back of the card and returned it in less than two weeks.

About a year later I ran into him at the Kansas City Chiefs/ Jaguars tilt at 3rd Base. I asked him how he liked the cards I made him. He stopped and his eyes brightened. Apparently he had no way of getting back in touch with me after he got the cards. He had already given them out and signed many of them for friends and family. We talked for a bit, and he asked for some more, which I was really happy to do for him.