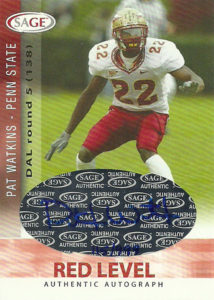 Pat Watkins was a rangy defensive back at Florida State measuring at an impressive 6’5″. For the Seminoles, Watkins played in 49 consecutive contests from 2002-2005.  He ranked third on the Seminoles with 77 tackles in his final season at Florida State in 2005, while laying down the wood at safety.  The Cowboys selected Watkins in the 5th round of the 2006 draft. He primarily made his living over his career in Dallas as a special teamer, although he managed to pull in 38 tackles, 3 interceptions, 7 passes defensed during his rookie campaign.  In 2007 he blocked a field goal by the Minnesota Vikings and returned it 68 yards for a TD, but unable to make the transition to free safety, and suffering some injuries, the Cowboys cut Watkins in 2010. He spent the remainder of the season with the San Diego Chargers, but was not retained after the year.

Watkins traveled to the CFL, where the Argonauts signed him as an import player and transitioned Watkins to corner in 2012. After a brief period of adjustment, Pat earned All-Star Honors from the league in his rookie season. He’d finish the season with 67 tackles and 5 interceptions- which tied Watkins for first in the CFL. He’d continue his stellar play in 2013 earning another All-Star Honor while posting 43 tackles and 5 interceptions. In 2014, he took his show to the Edmonton Eskimos. There Pat helped the Esks win the Grey Cup in 2015, with a key critical interception to keep Edmonton in the game.   As of 2017, Watkins still plays for the Eskimos.