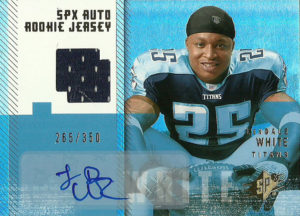 LenDale White was part of a devastating backfield trifecta for the Tennessee Titans that included both Chris Johnson and Vince Young.  While Johnson’s skill set was of the fleet footed, and Young was always a threat to take off backyard football style after not finding a receiver, White was a pure downhill power runner.  He recorded his first 100 yard performance in 2007 against who else -but the Houston Texans. White and Johnson became known briefly as ‘Smash and Dash’.

The NFL can be a cruel place. LenDale was much maligned by the media and scouts after he declared from USC. While the weigh in and subsequent body inspections have been likened to a meat market, White did not look at his best and was essentially body shamed for it.  He had a putrid rookie season after being selected in the second round of the 2006 draft by the Titans, but turned it around with a solid 2007 campaign rushing for over 1,100 yards on 303 carries, bringing back fond memories of Eddie George with his downhill running style helping Tennessee reach the playoffs.  It’d be in 2008 that White was joined by Chris Johnson, and while White’s numbers were down, his change of pace and style allowed the Titans to frustrate opposing offenses all year long.  Briefly, the Titans success, coupled with Vince Young, eclipsed the Texans broadcasts shown locally in the Austin area, much to my chagrin. It was a dark time in Texans history.

In 2009 White got into serious shape, which may have led to his downfall. LenDale’s play style was much more akin to being a powerback. He’d just bowl over defenders to counter for his lack of elite speed. Without that, he was lost in the shuffle behind Johnson by the end of the season.  After resigning with the team in 2010, he was traded to the Seahawks, reuniting him with his college head coach Pete Carroll.  He’d be released shortly thereafter for violating a drug test, and then sign with the Denver Broncos. During a preseason game, LenDale blew out an Achillies and never recovered. He’d be released in 2011.

White is perhaps best known as being a member of USC’s back to back national championships in 2004 and 2005 alongside Reggie Bush and Matt Leinart. The team failed to score the trifecta when they were defeated in the 2006 Rose Bowl by the Texas Longhorns. LenDale can be seen in the ESPN 30 for 30 presentation Trojan War where he is interviewed about his impressions of the 2006 Rose Bowl and the USC Trojans teams of lore.  He also is an active USC Alum and can be frequently seen on the sideline during games.

LenDale is another player that you have to wonder about. He failed the NFL Combine drug test in 2006, and then again in 2010- which he was suspended for, apparently all over marijuana.