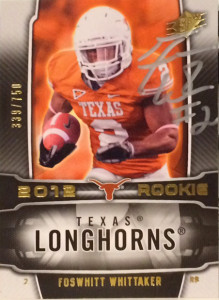 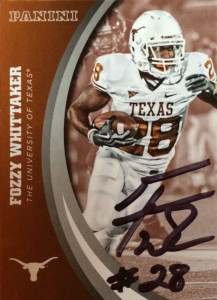 Fozzy’s NFL career has required a lot of grit and a good agent. He’s clawed his way into the lineup 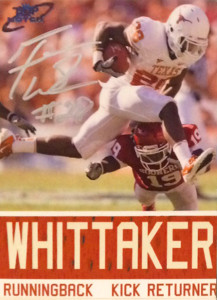 with Carolina where he serves primarily as a 3rd down scat back for the Panthers offense, after brief stops in Arizona, Cleveland, and San Diego. During the last 2 seasons, 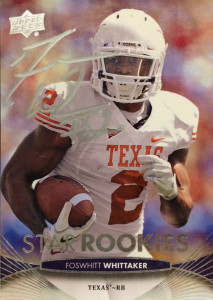 Fozzy has played in 25 games, starting 2.  He’s rushed 57 times for 253 yards and 2 TDs, while catching 17 passes for 124 yards and a TD. He’s also spent a bit of time on special teams returning 20 kicks for 471 yards.
During his relatively brief NFL career, Fozzy has demonstrated a knack for being a dangerous receiver out of the backfield. He has had a few highlights, such as transforming a 26 yard screen pass to a diving TD against the Saints, and a swing pass 39 yards across the middle for a TD against the Cardinals in the Wild card game of the 2014  playoffs. 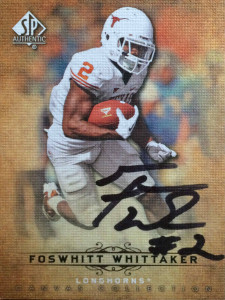 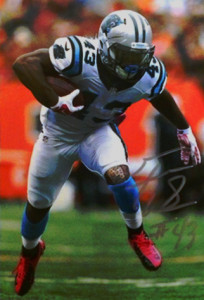 A great fan favorite, Fozzy signs at
all events, and volunteers regularly for team events to meet fans. At the Mighty Fine Burgers
Battle of the Beast event, Whittaker was in rare form. As the maitre ‘d of the event he was in charge of motivating local high school players to eat as much as they could. Surrounded by a large and raucous crowd Fozzy was in his element, with a beaming smile, having a great time. Whittaker has no shortage amazingly of great photos, whether it is him jumping over a would be tackler, galloping across the grass, or getting a kiss from a baluga whale, I did honestly 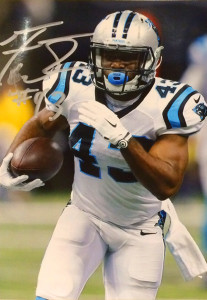 ask for a lot.
I’m not really a photo memorabilia kind of guy, but with such a plethora of great shots of Fozzy, I compromised and decided to get some things signed on high quality 4×6 photo stock- which could eventually become a thing for me as I run out of stuff for guys who appear regularly. Still Fozzy kindly and patiently signed everything, while discussing how his career has progressed along.  We talked also briefly about how some of those photos need to make their way onto Carolina Panthers cards of him, and how I thought his efforts in their Super Bowl loss provided the team a much needed spark. 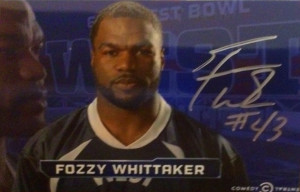 Fozzy was also a guest star on the Comedy Central show Key and Peele which routinely made fun of NFL players and their outrageous names. Instead of lampooning Whittaker, they just had him appear on the skit and say his name. When I asked him about this event, he told me that it wasn’t like they flew him out to LA for the taping- they just shot the video in front of a green screen. After getting one of the 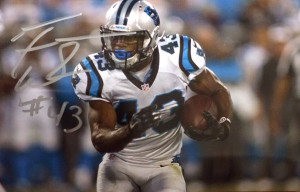 Comedy Central photos signed, I gave him the extra one on me, which he really liked and showed his wife.

The fun times didn’t end there as I had two more cards to get Fozzy on at the Coop event in May. He signed his Panini UT card and this really nice SP Authentics canvas card. 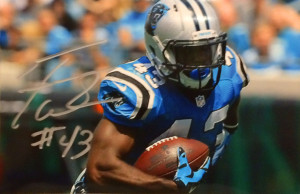