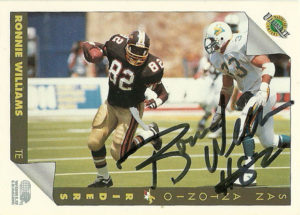 Ronnie Williams played college ball for the Oklahoma State Cowboys from 1984-1987.  Originally a quarterback, he’d be converted to wide receiver by his senior year.  Over his time at OSU Ronnie completed 264 of 349 passes, and as a Senior caught 26 passes for 304 yards and 2 TDs.

He’d sign with the San Diego Chargers as a free agent in 1988. After not being able to latch on with a team over the next few seasons, Ronnie decided to give the WLAF a shot.

Ronnie was selected in the first round of the WLAF positional draft in 1991 by the San Antonio Riders. He’d lead the team in receptions with 30 catches, and 4th in 321 yards.  In 1992 Ronnie had 20 receptions for 216 yards and 4 TDs.  Although the Riders finished with a 7-3 record, they were left looking in on the playoffs. Like the rest of the WLAF, the Riders were dissolved with the league after the season concluded. Ronnie is notable as he is the franchise’s career leader in receptions with 50. 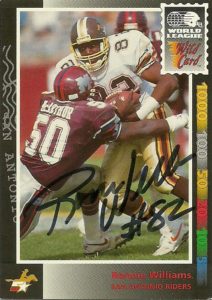 Ronnie became one of the WLAF success stories. After the 1992 season, he signed with the Miami Dolphins.  He didn’t see the field in 1993 and was primarily used as a 3rd TE and blocker by the Dolphins over his career.  Perhaps his most memorable moment was catching his first professional TD pass, a 1 yard sneaky grab from Dan Marino during the 1994 playoffs in a win over the Chiefs (27-17). He played for the team through 1995, joining the Seattle Seahawks in 1996.  Ronnie caught his only regular season TD from Rick Mirer that year. After the season he’d retire.

Ronnie had two amazing WLAF cards that were not widely available until after the 1992 season, and I always wanted to get them signed. Plus he was a Rider. I had just barely missed him on two or three occasions, but finally got a hold of him.  I agreed to send a donation to his kids program and updated him on the status of many of his teammates.