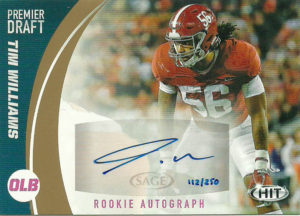 Tim Williams played at Alabama where he was a beast. With unrivaled speed around the edge and an impressive first step, he started in both 2015 and 2016, posting impressive attack lines: 11.5 TFL and 9.5 sacks (2015), and 16 TFL and 9 sacks (2016).  The knock on Williams is that he played in a rotation and where he was relatively unproven as a zone or pass defender. Tim has however demonstrated that he is an excellent edge rusher, especially in a 3-4 alignment.

Tim was selected with the 14th pick of the 3rd round by the Ravens in the 2017 draft.  A great value here for the Ravens, as Williams will be relied on early to come in and contribute as a situational pass rusher in their 3-4 defense.