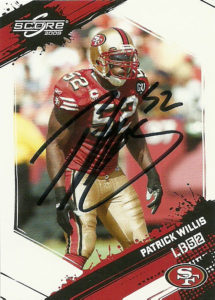 Patrick Willis played collegiality for Mississippi from 2004 to 2006. Over his final two years at the school, he posted a whopping 265 tackles, 21 sacks, 6 tackles for loss, 2 forced fumbles, and 7 pass deflections.

Considered the complete package entering the 2007 NFL draft, he was drafted 11th overall by the San Fransisco 49ers.  During his career with the ‘9ers, Willis played a combination of middle linebacker and right linebacker through the majority of his starts.  A highly durable linebacker, Patrick earned All Pro and Pro Bowl honors in 5 of his first 7 seasons in the league.  It’s hard to agree on what season serves as Willis’ best year. During his rookie year he had a career high 135 tackles.  Later in 2009, Patrick had 3 interceptions for 33 yards and a TD, and then in 2010 he posted a career high 6 sacks.

After an injury shortened 2014, Patrick elected to retire from the sport after years of wear and tear on his feet.  He went into business where he joined a Silicon Valley startup. I wrote him in 2016 through his company, where he signed this card for me and included a nice metal business card.