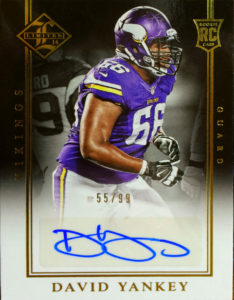 Stanford certainly has over the last 5-7 years established itself as a decent clearing house for NFL grade offensive linemen. David Yankey is no different. The Australian born lineman has been all over the map during his life.  He’s a big physical specimen at 6’6″, 315, and after being named an All-American in both 2012 and 2013, David was drafted by the Minnesota Vikings in the 5th round of the 2014 draft.

He had a rough go of it his rookie and sophomore years and was in the final cut downs for 2015. David was signed by the Carolina Panthers and made their practice squad in 2016, seeing action in 6 games.