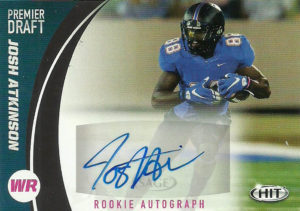 Josh Atkinson put up solid numbers for the University of Tulsa. In 2015 he had 76 receptions for 1071 yards and 5 touchdowns- one of them going 80 yards to paydirt.  He had equally impressive numbers in 2016 recording 78 receptions for 1058 yards and 8 touchdowns from QB Dane Evans.  Atkinson ran a 4.64 40, and with the knock he was from a ‘small school’ wasn’t selected in the 2017 NFL Draft. I hope he continues his football career. I think that he’d make a good fit for the Arena Football League or one of its competitors.

I like this card of Josh a lot. The photo is well placed in the composition, and the highlighted area is a nice touch to really emphasize the autograph.