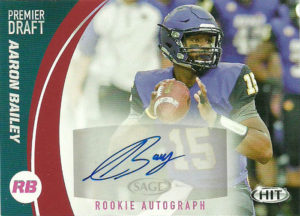 Aaron Bailey played quarterback at Northern Iowa. A dual threat both in the air and on the ground, Bailey transferred to NI in 2015 from Illinois. In just two years he posted 2,538 yards passing, and 1,760 yards rushing (25 TDs) for the Panthers.  Scouts were unsure as to where the untamed Bailey would be a fit at, however his pro day was impressive enough to garner interest. Aaron went unselected in the 2017 NFL Draft. He’d be signed to a free agent contract by the Baltimore Ravens, and converted to wide receiver. Unfortunately Aaron suffered an undisclosed injury during training camp, causing him to miss the entire season. Currently he is a free agent.