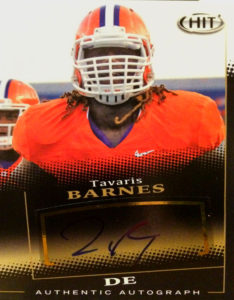 Tavaris Barnes comes from a long line of successful defensive lineman from Clemson. At 6-4, 275 Barnes certainly passed the eyeball test for most pro scouts, but his stats suffered due to his lack of full-time playing status.  Over 4 years for the Tigers, Barnes had 46 total tackles, 9 tackles for loss, and 5 sacks. His Sportscenter moment happened when he recovered a fumble against the Louisville Cardinals for a touchdown during the 2014 campaign. Many teams regarded Tavaris as an intriguing project, but he was not selected during the 2015 NFL Draft.

Barnes instead took the free agent route and has seen one year stints at a variety of stops.  He made the Saints roster in 2015 and recorded 5 total tackles. In 2016, he joined the Seahawks, but did not see any playing time. 2017 saw Tavaris on the rosters of both the Bucs and Redskins throughout the season.