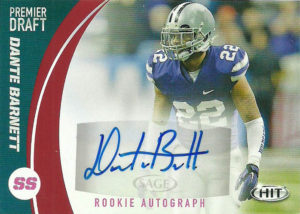 Dante Barnett is a great underdog story.  A 3 time captain at Kansas State playing from the safety position- he missed nearly his entire Senior campaign due to injury.  He opted to return for a 5th year, and posted modest numbers for the Wildcats.  Over his 5 year run from 2012-2016, Dante posted 242 combined tackles, 10.5 tackles for loss, 1 sack, 2 fumble recoveries, 16 passes defended, and 8 interceptions for 160 yards. He was not invited to the 2017 NFL combine and was not selected in the following draft.  Barnett signed with the Denver Broncos, but was among the final cuts before the regular season began.