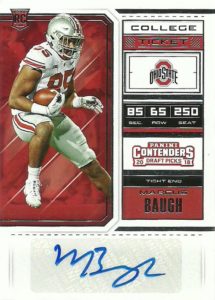 Marcus Baugh played for The Ohio State University from 2014 to 2017. An underutilized tight end, Baugh spent the majority of his time honing his skills as a blocker. Still he managed to carve out a little niche for himself in the Buckeye offense, being one of only two players to have at least 1 catch in his last 24 games.  At 6’3″, 247, Baugh finished his college career with 55 receptions and 8 TDs, good for 9th and 8th respectively all-time for his position group at the school. Marcus was not selected during the 2018 NFL Draft. Scouts were sour on his lack of production and experience, but really think he has the potential to ‘grow’ into his frame.

Marcus was signed by the Raiders after the draft, and currently is a member of their practice squad.