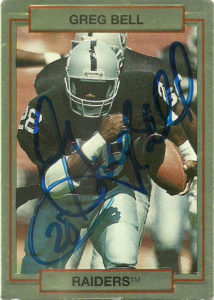 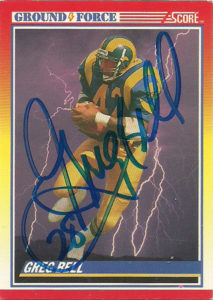 Greg Bell is one of these pros that got no respect. He flew under the radar at Notre Dame, posting 158 career carries, 870 yards and 10 TDs. His stats were diminished due to a broken leg in his junior year and a sprained ankle in his senior campaign. He’d be selected in the first round of the 1984 draft by the Buffalo Bills. The Bills were reeling from the loss of All-Pro back Joe Cribbs to the USFL Birmingham Stallions.  They ran a ground pound offense that was very much dependent on a solid backfield.  Greg’s rookie season was that solid effort the Bills were looking for. He had 262 carries for 1100 yards -on the dot- 7 TDs and an NFL long 85 yard jaunt. He also displayed solid hands catching 34 passes for 277 yards and a TD. He’d earn his one and only Pro Bowl appearance after the season.

In 1985 things got awkward, as Joe Cribbs returned to the Bills. Greg split time at RB and FB for Buffalo, but with Cribbs return, it ate into Bell’s numbers. Still Greg set a career high with 58 receptions for 576 yards, to go along with a bit over 880 yards and 8 TDs rushing. After a poor showing in 1986, Greg found himself as an integral part of NFL history.

In 1987, Eric Dickerson was having a nasty holdout with the Los Angeles Rams- a notoriously cheap franchise at the time.  The Rams pulled a colossal trigger with both the Indianapolis Colts AND the Buffalo Bills. The Rams received a bevy of draft choices from both teams and running backs Owen Gill (IND)  and Greg Bell.  The Colts got Dickerson, and the Bills got Cornelius Bennett. Before the Herschel Walker trade, this was considered the largest blockbuster trade of all time.

Greg saw very little time in the lineup during 1987. It’d be in 1988 that he’d really shine. Under the Ernie Zampese Rams offense and coach John Robinson, the Rams were a threat not only to throw the ball with Jim Everett, but to run it as well with Greg. Bell had his best season as a pro in ’88, racking up 1212 yards on 288 carries, he’d also lead the NFL in rushing TDs with 16.  He’d follow up his stellar 88 season with much the same in 1989 with 272 carries for 1137 yards and a league leading 15 TD rushing. – All this from the guy who was considered a ‘toss in’ on the Eric Dickerson trade. The problem is Greg didn’t apparently really earn too many friends in the Rams organization. Bell was just different…  He was also what was termed as a ‘sidewinding runner’ which could also have contributed to the 13 fumbles he had in 2 seasons in LA.

Greg wanted to renegotiate his contract with the Rams in 1990. The notoriously stingy Rams felt otherwise, especially after just signing him to a new deal last year. With seemingly solid runningback depth at the time, and gambling on the health of former Seahawk Curt Warner, LA jettisoned Greg for a 4th round pick to the LA Raiders. There he just… disappeared. True. The Raiders were stacked at runningback with Marcus Allen and  (later in the year after baseball commitments,) Bo Jackson, but Bell had no media impact whatsoever. I remember looking at his Action Packed Rookies card and just being so upset he was a Raider.  He was active for just 6 games in 1990 rushing for just 164 yards on 47 carries and scoring just 1 TD. He’d battle for an injury settlement as a final roster cut and retire in 1991.

Greg has had a lot of time to reflect on his playing days. He enjoys being a dad and has his own radio show.

Well Greg Bell was turning into quite the white whale for me. When I mailed out to him in 2010, I was excited for the chance to get his autograph. Instead I got my return envelope back with my cards unsigned. While that was disappointing, I had hoped for another shot to get him on these two cards. Months turned to years, and I waited patiently for a paid signing. Finally almost 8 years after I failed, I found a paid signing through Sportscollectors.net.