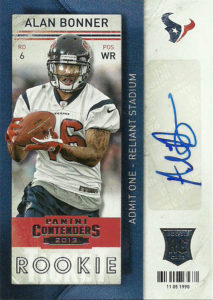 Speedy Alan Bonner was a sleeper pick in the 6th round of the 2013 NFL draft by the Houston Texans. During his 4 year stint at Jacksonville State University, Alan had 114 receptions, 1,976 yards, and 20 TDs.  He also contributed on special teams with 77 punt returns for  972 yards and a 64 yard TD.  The Texans hoped to develop Bonner under Andre Johnson alongside Deandre Hopkins, but it never came to pass. Bonner has spent almost his entire NFL career on injured reserve in some fashion. Despite having a head turning camp in 2015, he would not make the squad.

The 2013 NFL draft was not friendly to the Houston Texans. Outside of Hopkins, Ryan Griffin, and David Quessenberry,  the vast majority of players who were selected in this draft, are no longer on the team or in the NFL.