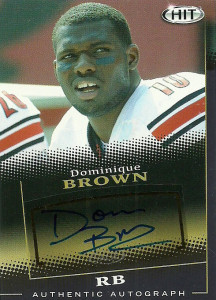 Dominique Brown played for the Louisville Cardinals. A short yardage back for the Cardinals, Dominique clicked in at 6’2″, 235 and reminded scouts of Toby Gerhart.   Frequently injured, Brown finished his Louisville career with 1,736 yards and 16 TDs on 399 carries (4.35 YPC), adding 47 receptions. Brown had a solid East-West Shrine performance, but then ran a flat 4.63/4.65 at his Pro Day with a brutal 9-foot-1 broad jump.  He was projected to go late in the 2015 draft, as scouts had questions about his dedication and work ethic.  He signed with the Tampa Bay Buccaneers as a free agent and later finished the season on the roster of the Pittsburgh Steelers rushing 18 times for 39 yards in 3 games. Currently Dominique is a free agent/ retired.