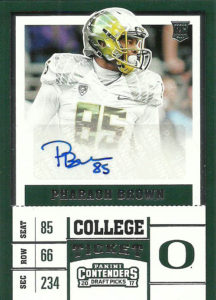 Tight End Pharoah Brown was signed as a free agent by the Oakland Raiders shortly after the 2017 NFL Draft concluded. The former Oregon Duck scored well at the combine, leading his group in both the verticle jump and bench press reps. He had a pretty solid career in Eugene, but a horrific injury during his Junior season combined with three separate acts of violence incidents sent his draft stock plummeting. The former Duck finished with 70 catches for 1,011 yards and 13 touchdowns. With few valid options outside of free agent signee Jared Cook, Brown was given plenty of reps and opportunity to make the Raiders roster for 2017. He was waived in September of 2018 but quickly found a home on the Cleveland Browns practice squad.