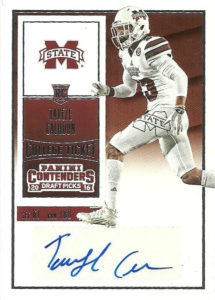 Taveze Calhoun played cornerback for Mississippi State from 2012 to 2015. A 3 year starter, he posted 158 total tackles, 12 tackles for loss, 21 passes defended, 3 forced fumbles, and 6 interceptions for 98 yards. He was invited to the combine, and while scouts loved his overall frame, grit, and leadership, they feared that his lack of top overall speed would not translate to the NFL. After not being selected in the 2016 NFL Draft, Taveze signed with the Chicago Bears, but would be released during final cuts. The New Orleans Saints signed Calhoun to their practice squad a few days later, but he’d be again released during final cuts in 2017. As of early 2018, Taveze is a member of the Miami Dolphins.