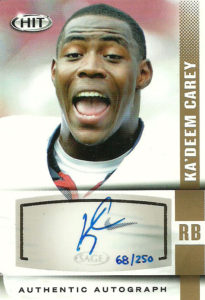 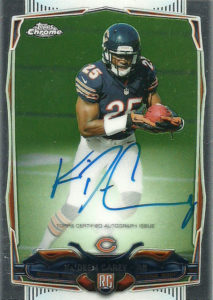 The always smiling Ka’Deem Carey is seen here with a very excited look on his face. In his other Sage card issues, he displays a notable sense of humor as he has a blue tongue- probably from eating a snow cone.  The Topps Chrome here is pretty exciting as well. It’s good framing of an action shot, but my complaints about Topps 2014 is that it looked too much like an ornate front grill of a car.

Since joining the Bears, Carey has had near back to back 160 yard seasons. In 2015, Ka’Deem scored his first 3 professional TDs with starter Matt Forte sidelined for the year.  With Forte moving on to the Jets after the season, Carey was expected to help carry the load with Jeremy Langford. He’d be injured in early September of 2017 and cut later in the month. Currently he is a free agent.