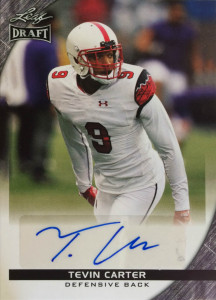 Tevin Carter finished off his career at Utah in smashing style, as the Las Vegas Bowl MVP recording 2 interceptions for 61 yards and a touchdown.  With the flexibility to play both Safety positions, Carter played 2 years at Utah recording 72 total tackles,  9 TFL, 1 FR, 4 pass deflections, and 4 interceptions for 147 yards.

An intriguing prospect and solid tackler, Tevin has excellent size and speed for the position.  Scouts believe that Carter still needs some polish to really get his game up to the NFL level.  Tevin looked to be a 3rd day selection or a priority free agent, but went undrafted in 2016.

He signed with the Washington Redskins who quickly listed him as a LB/S hybrid.  After not catching on with the Skins, Tevin was given a tryout by the Panthers but has not caught on with a team.