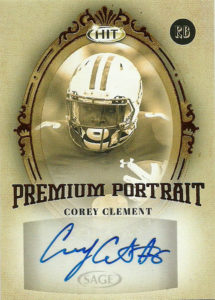 The understudy to Melvin Gordon, Corey Clement played for the Wisconsin Badgers from 2013 to 2016.  In 2013, Corey posted a monster 8.2 yards per carry on 67 carries in 2013.  In his final year playing for the Badgers in 2016, Corey had 1375 yards on 314 carries and 15 TDs. Over his time in Madison, Corey earned 2nd Team All-Big Ten in 2013 and First Team All-Big Ten in 2016. There were some durability questions from scouts, and that combined with a disastrous 2015 campaign, relegated Clement to the bottom half of the 2017 draft.  He signed a free agent contract with the Philadelphia Eagles.

The Sage Premium Portraits look alright, but the mirror effect feels a bit unnecessary. Am I looking at a reflection? Also, gold and silver are colors you should be cautious of. They are both eye catching from the normal spectrum of color, and can scene steal if used too much. In this case, everything is a shade of gold so it makes the canvas bland and boring.

Corey finished his rookie season with 321 yards rushing and 4 TDs. He also caught 15 passes for 178 yards and 2 TDs. A key component to the Eagles Super Bowl LII victory over the New England Patriots, Corey made 4 catches for 100 yards and a TD.