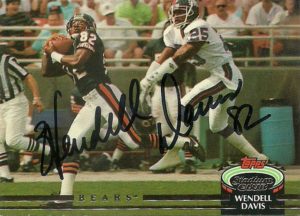 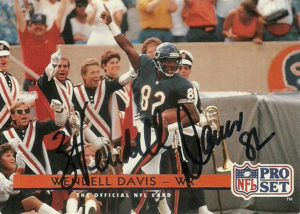 Wendell Davis was one of the top receivers in the 1988 NFL Draft. He played 3 years collegiately for LSU, racking up 183 receptions for 2708 yards and 19 touchdowns. His best year came in 1986 when the sure handed receiver caught 80 passes for 1244 yards and 11 touchdowns. He’d be the final pick of Round 1 by the Chicago Bears. 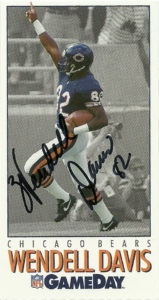 The Bears receiving corps was aging, and the team which was a run first smash mouth franchise, never really put much thought into it. With deep threat man Willie Gault departing for greener pastures with the then Los Angeles Raiders, this selection made total sense by the Bears front office.  Davis was not allowed to claim a starting position right off the bat. He’d have to fight up a roster that included Ron Morris, Dennis Gentry, and Dennis McKinnon, who were not only good receivers, but fine run blockers as well.  He didn’t start a game his rookie year, but Wendell had 15 catches for 220 yards. His numbers slowly increased over the next few seasons partially due in fact to the team’s maturation at quarterback under young Jim Harbaugh. Wendell had his best season in 1991 when he posted 61 receptions for 945 yards and 6 touchdowns. To put these numbers in perspective- Davis’ receiving numbers were the best by a Chicago Bears’ receiver since Dick Gordon in 1970!  While Wendell’s numbers slipped in 1992, all signs still pointed towards a solid 1993 campaign.

It was during a game in 1993 against the Philadelphia Eagles, Davis was going up to make what would be considered an ‘ordinary’ NFL catch, but as he laid back, his feet got caught on the exposed astroturf and he tore both of his patella tendons completely off, causing his kneecaps to go up into his thighs. Davis’ career was over.
Still, if there was a silver lining to what happened, Davis’ injury paved the way for the modernization and safety improvement/ removal of turf all over the league.  In 1995 Davis attempted a comeback with the Indianapolis Colts, but did not appear in any games.

He’s made his way into coaching with the 49ers, and at both the high school and college level since then. Currently he lives in Chicago. 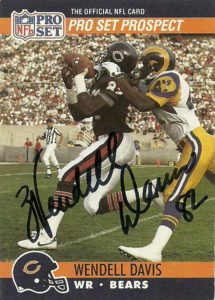 I feel like the Topps Stadium Club, Pro Set 1992, and GameDay cards are all part of the same photographic sequence. It focuses on what Davis did best over his career: Hauling in the long bomb from whatever quarterback was currently under center for the Chicago Bears.  Overall, these are some very nice action shots, with the GameDay again being my favorite. Davis really nailed the autograph on this one however, and of the batch that I have received back in 2018, his certainly matches the excitement of his cards the best.