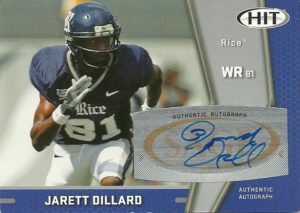 Jarett Dillard played for the Rice Owls back in 2005. He posted 3 1,000+ yard seasons back-to-back-to-back. In both 2006 and 2008 he had 21 and 20 touchdowns receiving- respectively.  Dillard owned many of the receiving records at the school upon his graduation. He finished his collegiate career with 4,138 yards on 292 catches and a whopping 60 touchdowns receiving- an NCAA record.

Jarett was selected in the 5th round of the 2009 NFL Draft by the Jacksonville Jaguars.  (At 5-10, 185, it was thought that Dillard could not stand the rigors of a full NFL season.) During  his rookie season he logged 6 catches for 106 yards, before suffering a season ending broken ankle. Dillard’s season was ended before he even played a down in 2010, when he injured his foot and was placed on IR. In 2011, he started 5 games and caught 29 passes for 292 yards and his only professional TD – an 11 yard pass from Blaine Gabbert in a 17-3 win over the Indianapolis Colts.

The following year in 2012, Jarett was released before training camp. He’d sign with the Lions but not make the final cut. Dillard signed with the Cardinals in 2013, but again failed to make the final roster.

So every once in a while I pick up a Walmart or Target Autographed memorabilia hangar box. It’s a cheap frill, that keeps the autograph beast at bay for a few days while I wait for a TTM to arrive. Typically they do not hold very much of value. I like the Walmart ones just a bit more because they typically have one autograph and one bonus patch along with 4 packs of cards. In this box I got not only this autographed Jarrett Dillard card, but also a patch card- autographed by Christine Michael. Not a bad find for 10 bucks.