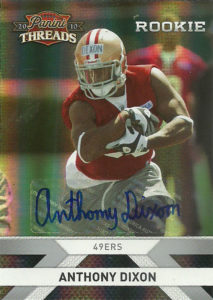 Selected in the 6th round of the 2010 NFL Draft out of  Mississippi State, Anthony Dixon was quite a surprise for the San Fransisco 49ers.  The power back made the roster after the sudden retirement of Glen Coffee, by putting together one of the best preseasons in NFL history, rushing 74 times for 300 yards and 4 TDs.

Dixon pretty much backed up Frank Gore and Brian Westbrook during the season, but still managed to carve out 70 carries for 237 yards and 2 TDs in 2010. He spent the majority of the remainder of his 49er career on special teams, signing with the Bills in 2014.

He had his most productive year with the Bills, rushing 105 times for 432 yards and 2 TDs, including a career long 47 yard jaunt. Boobie also earned Special Teams Player of the Week Honors in Week 12 after he blocked a Jets’ punt. A lingering calf injury cratered his 2015 campaign and he was released in 2016.

After spending the entire season out of football, Anthony signed with the Spring League to showcase his talents to NFL and CFL scouts in 2017. He split time at runningback and fullback and had a 45 yard TD run and was considered one of the league’s standout players. Currently he remains a free agent.