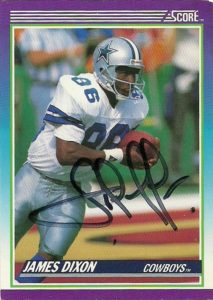 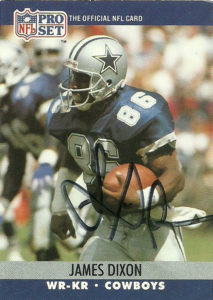 James is notable as he helped rookie Troy Aikman break the NFL rookie passing record (at the time) with 203 yards receiving, including that 75 yard bomb.  He also set the club mark with his 1,181 kick off return yards, breaking the mark previously set by Mel Renfro back in 1964- all in his rookie season.  Still he’s fallen into relative obscurity over the years and lives comfortably in Texas. 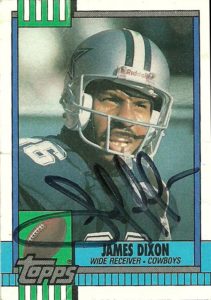 James Dixon was quite lucky. He played on a terrible Cowboys squad, but stuck out enough to get noticed before he faded off into obscurity. It was enough that 4 major brands (Topps, ProSet, Score, and Action Packed) all put out cards of him. After returning to the hobby, I was surprised that he didn’t appear in any lists on websites or any fans were clamoring for his address, so after many years, I decided to go ahead and do some sleuthing and figure out where he was at. He did not disappoint, signing these 3 cards in under a month.