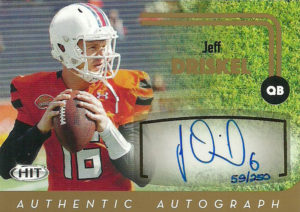 Jeff Driskell started his college career at Florida, but after losing the starting job (partially due to injury) he opted to transfer for his final year of eligibility to Louisiana Tech.  While playing for LA Tech, Jeff had his best year in 2015, starting all 13 games and going 279 of 448 for 4,026 yards, and 27 touchdowns to just 8 interceptions. By all accounts this was the best school single season performance by any quarterback since Tim Rattay.

A multi-sport athlete Jeff was not only selected by the San Fransisco 49ers in the 6th round of the 2016 NFL draft, he was also selected by the Boston Red Sox of the MLB in 2013. He was released before final cut downs in 2016, but was snapped up by the Cincinnati Bengals, where he served as the 3rd string QB.

Trapped behind Andy Dalton and AJ McCarron, it didn’t really seem like Jeff was going to go far in Cinci, but the coaching staff has really taken a liking to him. AJ McCarron was traded in the 2018 off-season to Buffalo, and an open QB competition ensued for backup between Matt Barkley and Jeff. He played well enough that it was believed that Jeff may have had the inside track on the job, but he suffered an injury during the preseason and began the 2018 campaign on IR.