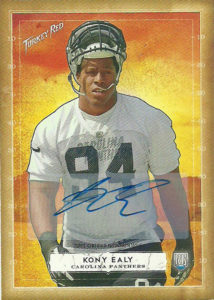 Kony Ealy was selected in the second round of the 2014 NFL draft by the Carolina Panthers out of Missouri. He put up solid numbers over 3 years for the Tigers from his DT/DE position, with 96 total tackles, 28 tackles for loss, 13.5 sacks, 13 passes defended, 1 fumble recovery and 1 interception for 49 yards and a TD.

During his rookie season in 2014, he played in 15 contests rotating out of the lineup on the defensive line. Kony had 4 sacks, 16 total tackles, and a forced fumble. In 2015, he started 9 games and had a career high 3 forced fumbles, 5 sacks, and 32 tackles. He had a decent 2016 as well with 32 tackles, 5 sacks, 2 forced fumbles and an interception.

During the off-season the Patriots traded a second round pick for Ealy, but he struggled to fit into their rotational scheme. He’d be released before the 2017 season began and signed with the New York Jets. The Jets tried him at a variety of places across the line, including at outside linebacker. In 4 starts Ealy finished with 11 tackles, 3 assists, 1 sack, and a pick for 9 yards.