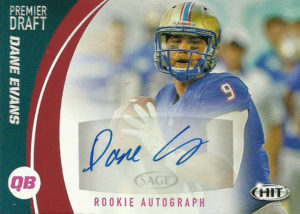 Dane Evans played college ball for the Tulsa Golden Hurricane from 2013 to 2016. He’d pass for 904 completions on 1577 attempts, for 11,680 yards, with 84 touchdowns to 47 interceptions.  Dane was the Hurricane’s all-time leading passer.  Evans was considered a sleeper in the 2017 NFL Draft, but he went unselected. He’d be signed by the Eagles, but be waived in the final cutdown before the regular season. In October of 2017, Dane signed with the Hamilton Tiger-Cats of the CFL and was added to their practice squad.