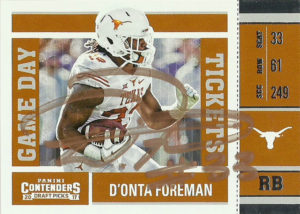 2017 was a terrible year for me in both TTM and IP events. I had struck out badly in Houston in November on both Clowney (no show) and Lamar Miller (no outside items). Furthermore I had missed Cedric Benson, and skipped out on a few events just based on a bad feeling. D’onta was originally supposed to sign the Tuesday after his breakout and breakdown game with the Cardinals- but with an Achilles injury doing him in it was postponed indefinitely.  I targeted my birthday as a possible time that they’d reschedule it for, and indeed that was the day. It was a bit late in the day at T-Mobile, but I went ahead and gave it a shot. I hadn’t seen any of my local autograph friends in a while, so I took advantage of the situation to catch up with Nathan. 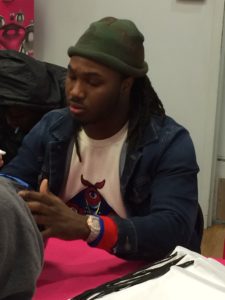 I got there a little early and was surprised that there was 5-7 people already there waiting. Is the area’s autograph market finally waking up? Anyway things went well and D’onta showed up. The people at the front of the line treated the event like an autograph session and Foreman noticed it as he had a noticeable annoyed look to him. When I got to the table I reached out and shook his hand to start. It broke his current mood and he really perked up. I confirmed the truth about how he showed up at the Houston Texans’ local workout and how that really impressed them, his injury, and then I critiqued his touchdown dance- imploring him to learn about the Electric Slide. I showed him White Shoes dance, and we had a good laugh. He also enjoyed the fact that I introduced 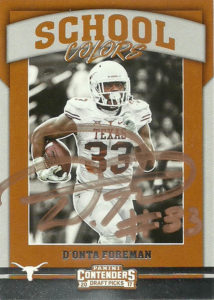 myself as ‘the real’ Lamar Miller since I was wearing his teammates’ jersey, and I gave him the sign of approval for humorously sporting Watson’s jersey  before the Cardinals game.

D’onta Foreman exploded onto the scene in Charlie Strong’s final year at Texas in 2016. Things just seemed to click for the young runningback and in his Junior Season, as he set and broke all sorts of Texas records (something you shouldn’t overlook in the company of guys like Ricky Williams and Earl Campbell).  The Doak Walker Award winner, Foreman rushed for 2,028 yards and 15 scores on 323 carries. Scouts loved his overall athletic talent but 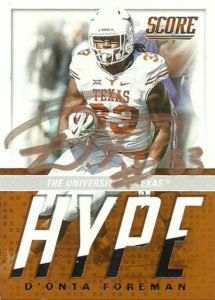 were concerned about his blocking in pass protection.

D’onta lasted until the 3rd round of the 2017 NFL Draft. I was already excited that the Texans had selected Deshaun Watson in the first round, but when they came back and took Foreman in the 3rd, I was elated. (Rumor had it the Seahawks with the next pick had targeted him as a quick fix for their runningback corps.) Houston really fell in love with Foreman after he showed up with the local kids for a workout. With incumbent RB Lamar Miller in the lineup, Foreman would spell him from time to time and be used in a variety of packages. D’onta impressed during the preseason, sticking out head and shoulders above the competition he was running against, demonstrating both 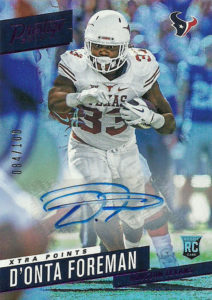 his knack for running with the football and catching passes out of the backfield. I sneakily picked him with my final selection of my fantasy draft and stashed him on my bench.

Foreman had his best game in Week 10 against the Arizona Cardinals. He had 10 carries for 65 yards and his first 2 professional TDs. On his last carry he rumbled 39 yards for a TD, but tore his Achilles as he fell into the end zone. He finished his rookie year with 78 carries for 327 yards (4.2 yards per carry) with 2 TDs, 6 catches for 83 yards, and on injured reserve entering camp for 2018.