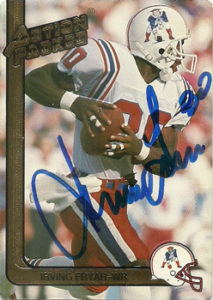 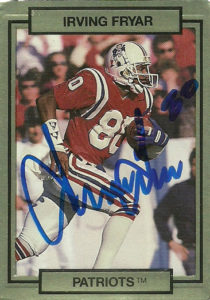 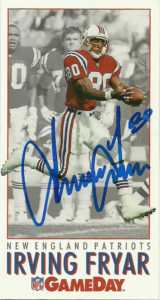 I had seen a fair amount of TTM returns coming in for Irving Fryar for a nominal donation. Armed with a few extra cards I always wanted to get autographed, I decided to give him another shot.
To be honest, things have been rough for Fryar since his playing days, as he has been in and out of trouble with the law for mortgage fraud. He was released in 2016 after serving 8 months in prison.

GameDay and Action Packed were among the most gimmicky of the early 90s cards you could get, but early on they rewarded you with outstanding action shots of your favorite players.  I couldn’t decide between these 3 cards, so I went ahead and sent all three out and took a shot. I really liked the GameDay card. It’s impactful and the framing is deliberate and precise. You can feel that Fryar is right at the moment of making that catch. The Action Packed 1991 is a very nice profile picture taken and framed at just the right size.  While the 1990 Action Packed card does nothing to stand out from his other cards, it is a rarity to see- little less to have autographed.