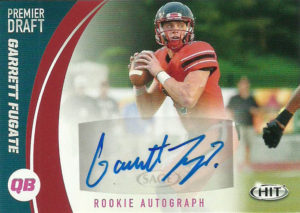 Garrett Fugate was a deep sleeper going into the 2017 NFL Draft out of tiny Central Missouri. In his final year playing for the Mules, Garrett threw for 3,657 yards, 31 touchdowns, and nine picks.  A dual threat, he also rushed for 457 yards and 8 TDs on the year. He performed well at the school’s pro day, and scouts came away impressed by his ability to spin the ball. Ultimately however he was undone by the small school stigma and a previous ACL injury which he had fully recovered from, and went undrafted in 2017.  At last count, at least 7 NFL teams showed interest in Fugate, but he was not signed. After going the whole 2017 season without football, Garrett found a home, signing a 2 year contract in early 2018 with the Montreal Alouettes of the CFL.

Good looking card here of Garrett as Sage attempts to shy away from the sideline sans pads images. Overall it is a pretty decent looking set, but Sage seems to be digging deeper down the list of available player names which is troubling when you look back at your autographs 2 to 3 years later and they are all free agents.