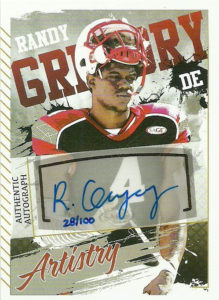 There is no denying the talent that Randy possesses. At Nebraska, after just two years he quickly climbed up the school’s charts to 9th place with 17.5 sacks.  He’s got a lanky frame at 6’5″ and at 235 he’s got a ways to go to grow into it. The Cowboys took a shot on Gregory with the 60th pick of the draft. Obviously he slipped down and off some draft boards due to his off the field issues. During his rookie year in 2015, Randy suited up for 12 games in between suspensions, posting just 7 tackles.  In 2016, Cowboys fans got excited when Gregory recorded 8 tackles and a sack in the first two games. – Then he got suspended during the suspension ending his 2016.

It’s not that Randy Gregory can’t catch a break. It’s that he keeps blowing every chance he gets. In April of 2017, the talented Randy Gregory failed his 7th NFL drug test since 2015 and has since blown off league officials. Time will tell how long the Dallas Cowboys or the NFL will be patient with him or how soon Gregory will go down as a high risk draft bust, but on 5/16/2018 Randy reapplied for reinstatement to the NFL.